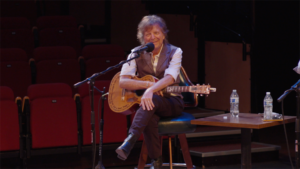 Even’s songwriting career spans many years and stylistic borders from the multi-platinum international hit, When You’re In Love With A Beautiful Woman by rock’s Dr Hook, to the three week running #1 Pop hit, I Love A Rainy Night by long time partner and superstar, Eddie Rabbitt. He has accumulated an unprecedented 53 BMI Awards, which include: 14 Pop Awards, 26 Country Awards, 1 Five Millionaire Award, 1 Four Millionaire Award, 2 Three Millionaire Awards, 4 Two Millionaire Awards, and 6 One Millionaire Awards. The Grammy nominated composer has written ASCAP’s Most Played Song of the Year, Love Will Turn You Around by Kenny Rogers and won BMI’s Robert J Burton Award, Song of the Year for Suspicions by Eddie Rabbitt, earning him the distinction as a BMI “Songwriter of the Century.” He received New York’s prestigious Big Apple Advertising Award for writing a series of national Miller Beer TV & Radio commercials, the CMA Triple Play Award (for having three #1 hits in one year) and has had #1 songs in numerous motion pictures and television productions.

Recently Even was inducted into the  Nashville Songwriter’s Hall of Fame.