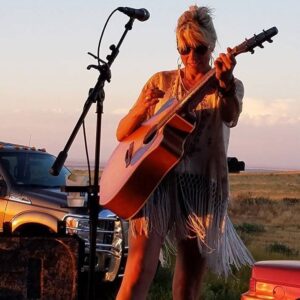 Quenby Iandiorio was introduced to the Country/Americana scene during her time in LA from `97-`09. But after years of enjoying her friends from out front, she decided it was time to have a go at it from up on stage. Late in `07 she picked up the guitar in earnest which was followed very quickly by recording her first song and shortly after by compiling her first band. By `09, Q’s desire to take the band all the way made a move to Texas inevitable, so she and original drummer, Clint Short (Shurman, Stonehoney, Weldon Henson), pulled up stakes and relocated to Austin.

Since then she has made four successful tours of the Northern and Northwestern U.S. resulting in her latest move to Livingston, MT from where she books and maintains a full-time performing and touring schedule, either with her country band or as a solo acoustic act.

This past year, in spite of COVID Quenby was able to fly to Texas to join producer/bassist, Donnie Price (Ruthie Foster, Guy Forsyth) and sound engineer, Stuart Sullivan (Sublime, Meat Puppets) at Sullivan’s studio, Wire Recording in Austin where they recorded three singles. “My Only Home is the Honky Tonks” is an original written in 2018, a high energy two-stepper about a honky tonk singer’s colorful life on the road.

“Here Lies My Broken Heart” is a collaboration, Quenby’s first co-write, with Montana friends and writers, Jessica Eve, Lee Calvin Eichelberger and Melissa Fourette. Torn between two interpretations of the song, she decided to record it twice, once as a heart-wrenching ballad, and then again as an upbeat flat-tire shuffle with the incomparable Herb Belofsky (Chris Wall, Dale Watson, Gary P. Nunn) on drums. Quenby hopes to release two of the singles as a 45 later this spring, so start saving up your pocket change for some classic fun!

The players on this recording fairly blew her socks and the session was quick and wildly successful. Thanks to Herb Belofsky on drums, Donnie Price on bass, Chris Reeves (Redd Volkert’s choice to replace him in the legendary Texas band, Heybale) on telecaster, Dan Walton (Asleep At The Wheel) on keys, and Grammy-Winner, Jason Roberts (Asleep at the Wheel, Bob Wills’ Texas Playboys) on fiddle, pedal steel and rhythm guitar. Thank you, gentlemen, for a mind-blowing trip!

Look forward to these singles dropping Spring `22 with a follow-up video.

In November Quenby went into our local studio here in Livingston, MT with engineer, Jamey Warren to record an acoustic track of a song she wrote in 2017 after the Charlottesville riots. She got to work with local musicians and dear friends, Jody Engstrom on upright bass and harmony vocals, asnd Chelsea Hunt on fiddle and harmony vocals. The single drops on Friday, January 7th on all streaming platforms. Stay tuned for the video!